If there’s one thing I’ve learned, that’s that there’s no such thing as a perfect build up: something will go wrong. This year, it was pretty minor, but still:

Even with these mishaps, this year was my highest volume: 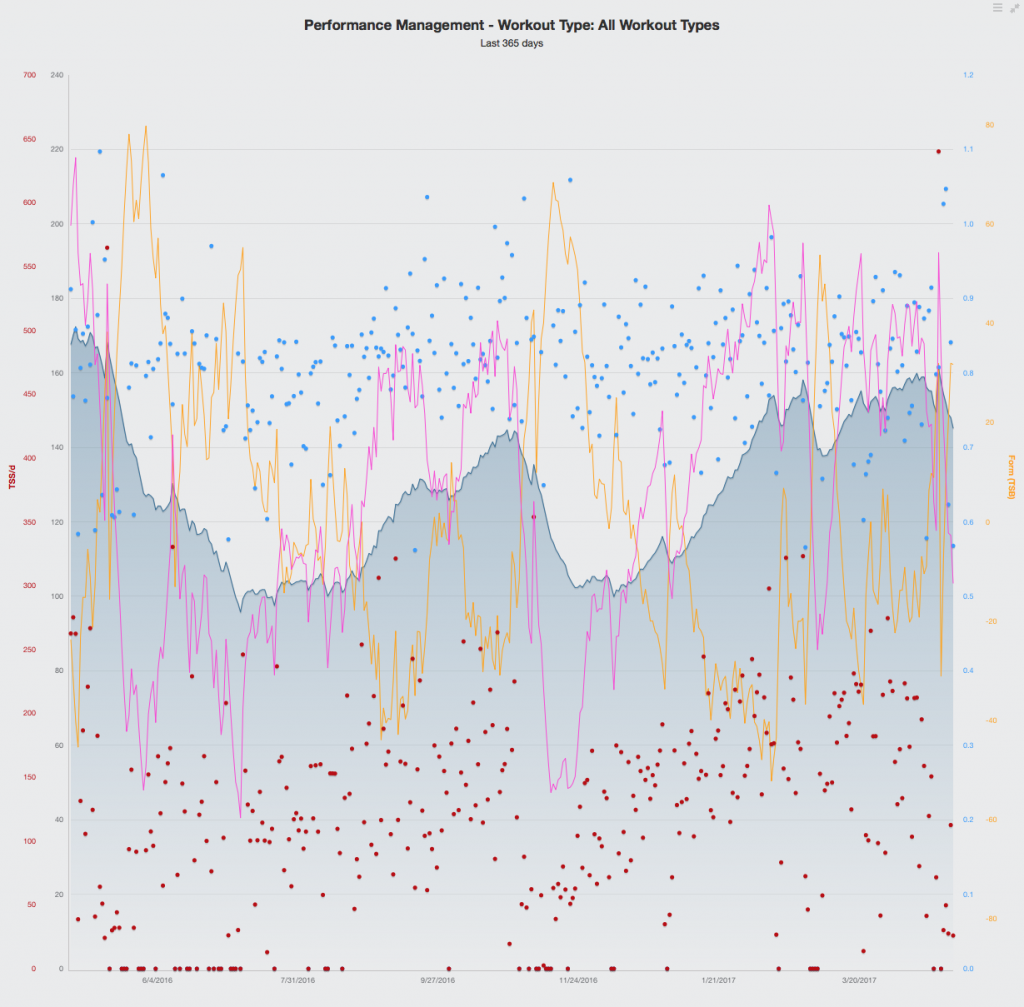 Fred came to support, as usual. And he did a fantastic job, as usual! We got to the swim start late and the line to the porta-john moved really slowly. As a result, I was lined up with only a few minutes to spare. I walked into the start corral, asked a volunteer where I was (“these people are about 1h30”), moved up as much as possible, but I probably seeded with people in the 1h20+ area. As a result, I had significant contact, mostly bumping into slower swimmers.

Also, I could really feel the drag from my chip on my left leg. Not sure why as it was on tightly. Perhaps I should wrap it in cellophane? 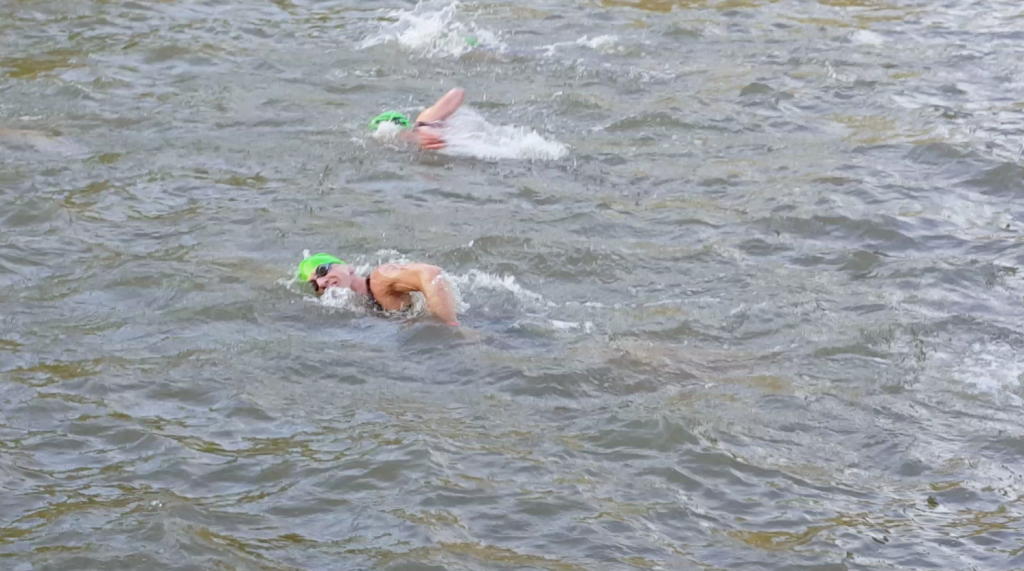 Leave it to Fred to find the guy in a green cap in the middle of 2600 other guys with a green cap.

I had some good sensations on the pull, feeling that my catch was effective (for me).

This was my first time wearing a swimskin. It went well. Next I should try to wear my jersey underneath it for the swim, instead of putting it on in T1. T1 was uneventful (4min06).

I went with RPE as François recommended. At the beginning, I didn’t feel comfortable at all. This is consistent with my face on the race pictures, where I look like crap. I knew I was developing too low power (I did peak at the powermeter every now and then), but I went with what I felt was sustainable. Somehow I found a rhythm and upped the power over the course. It was mostly uneventful except when I dropped my toolbox because of a bump. Luckily, recovering it was just a matter of a few seconds.

Food-wise, I had four bottles of malto/cyto mix (4 and 1 scoops, respectively), two of those in my Special Needs bag. This was a lot less concentrated than usual, and I drank through three of those. It was probably still too concentrated, and I should try 3+1 scoops. I also had three flasks of GU Roctane; I went through most of that, too. I picked up some water here and there, and that was that. I think I was able to ingest a lot more calories than during previous races and that helped tremendous on the run.

My position on the bike felt ok.

I was on course for a 4h50 for much of the ride until heading back north for the second time, which brought me against a serious head wind. My speed dropped below 30 km/h, even though I was working harder than earlier. Also, I kept on picking up people, so I knew it wasn’t me. I ended up with a 5h02 for 176.5km, which was close to what I thought I had (5h10 prediction).

On the run, it was much easier to ignore the numbers than on the bike. I started without worrying about pace, going with what felt right. Stopped at the loo after two kilometers, at the swim start, to pee. That took at least one minute. Maybe I should have done that in transition to get a faster run split? 🙂 That was my one pit stop for the day. I still refuse to pee on the bike or while running. Nope.

I walked the first aid stations but then decided I didn’t need to do that after the second or third one. I just concentrated on getting water, coke, and ice at each and fueled with Energy Blasts. I had a flask of Roctane with me but couldn’t bring myself to eat it. Instead, I wanted to get my second bag of Energy Blasts from Special Needs but they weren’t ready when I got there so I did without. My splits ended up pretty even, so I guess I gauged the effort right. I never was in any doubt that I would have blow up. I saw Fred and Leslie three times plus one at the finish. It was great to have their support. Crowd was great as ever. 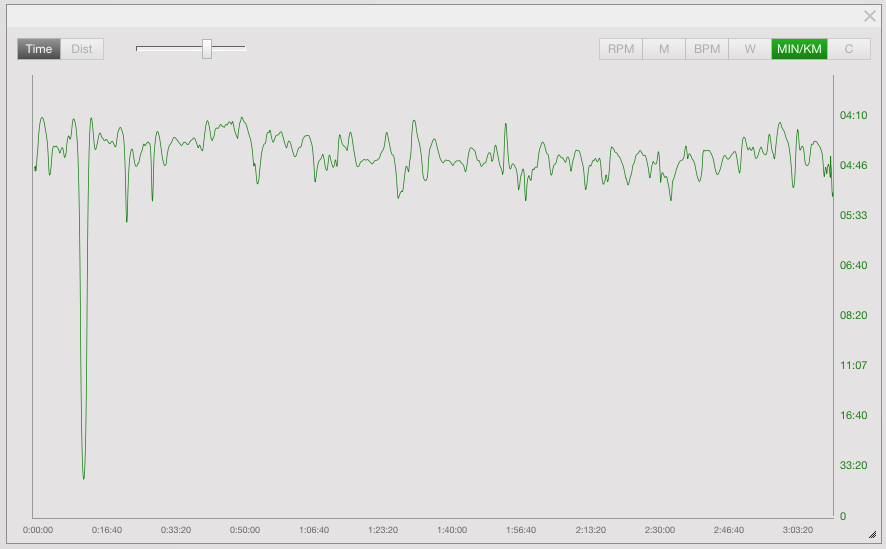 Apart from a bit of slacking in the middle, my run speed was pretty consistent. 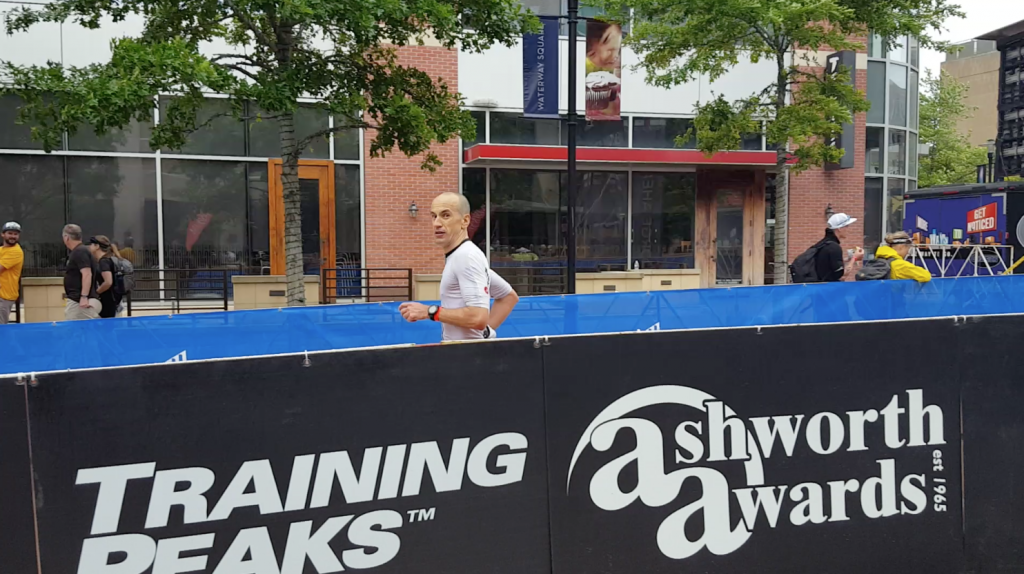 Can’t wait to get home! 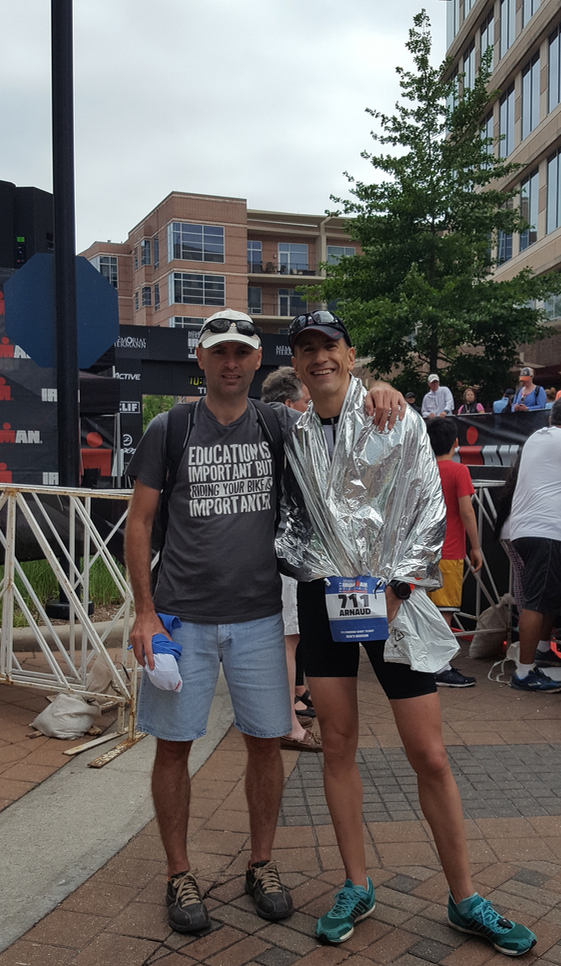 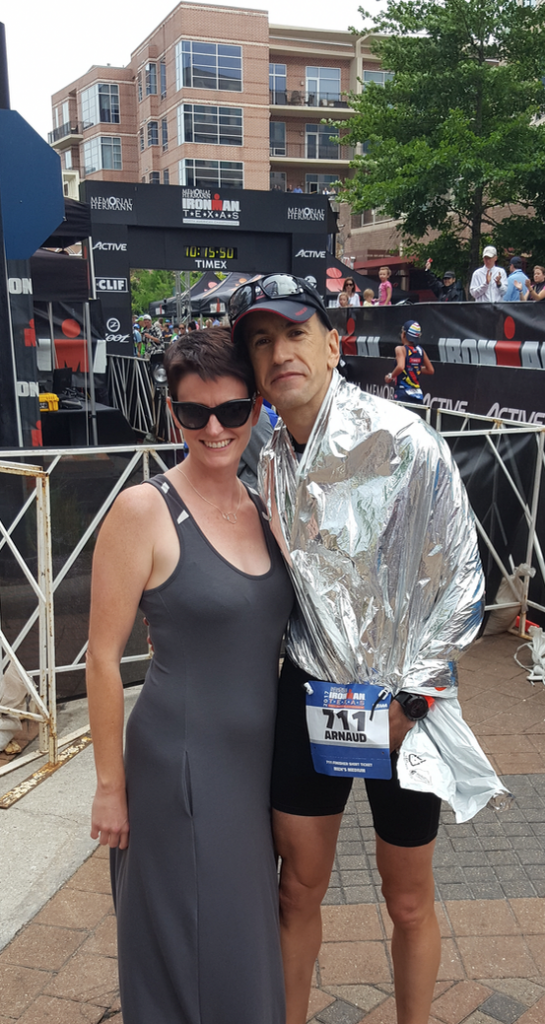 Thanks for being there, Leslie!

This is my fifth season working with François. He took me from a 11h22 in 2011 to this. Thanks, François! I couldn’t have done it without you.

Leslie, thanks for being there in the last few weeks and for you enthusiasm on race day.

Fred: you’re the best race day crew. Drinks are on me. And let’s get back to recording!