By Arnaud ChevallierMay 5, 2019 No Comments 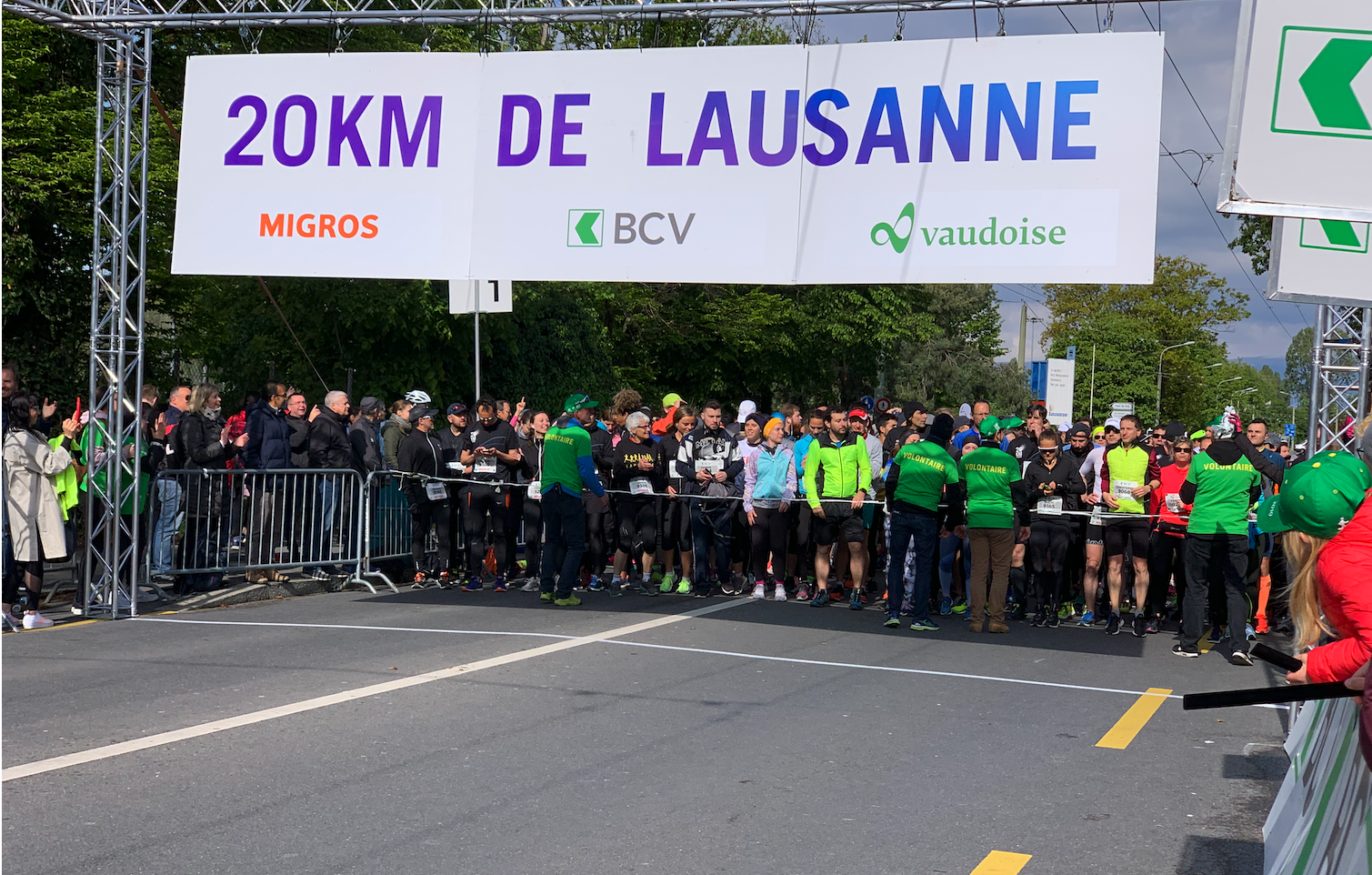 I’ve never experienced anything like it: Even when staying at a race hotel, I’ve never been so close to the start line. We just happen to be able to see the start line of the 20k of Lausanne from our living room.

What I’ve never experienced either is my request to be seeded in the 1h30 group being over ridden by the race organization. It’s not like they didn’t give me an option. No, no. They asked me where I wanted to be seeded, noted my preference (“bloc” 2), and overrode it, relegating me to the ninth and last bloc to start, some 35 minutes after the first one.

So, combining those two, I was still siping espresso (and another, and another) in my PJs as the first group was going, and I watched it all happen from the kitchen; how cool is that?

Leslie and I then went down to the start line. The weather had been changing over the past couple of days, and this morning was rather chilly. So it was wonderful to have her with me: Besides having her, naturally, it also meant that I could still have a jumper on even a few minutes before the start. I then got into the start corral, moved up a bit, and got to be on the front line. Nice! It would mean that at least the first couple kms would be clear.

I started the Garmin some 30 seconds before the start, waited for the gun, and was on my way. One dude zoomed past me but, judging from his form and his choosing the longer trajectory around the first roundabout, it was clear that he didn’t know what he was doing, so no good for pacing. I could hear someone else on my back left for a while but, otherwise, it looks like bloc 9 was behind.

Having a clear road ahead was great! I caught up and passed runner dude after one kilometer. My Garmin beeped at 4:34, but it felt that I was working a lot harder than that, so I got a little nervous, until I remembered triggering it 30 seconds before the gun. I felt that I was doing a 4:05–4:10 pace, so it was nice that my Garmin agreed.

I started catching up bloc 8 right in front of IMD, barely two kilometers in. I should have enjoyed the clear road more, because that the last of it that I saw. For the remainder of the course, I was dodging people, changing course and, sometimes, cursing not-so-much-under-my-breath as some AirPods-wearing sporting enthusiast with a “Lausanne jogging club” t-shirt decided suddenly to cut across the entire road to give a high five to a spectator right when I was arriving behind.

The weather held and we even had some sun as we hit Pully and turned around. Then it was Avenue de Cour. I saw Leslie in her bright yellow hoodie (brilliant idea!) right where I expected her, passed in front of the apartment, down Figuiers, around at Maladière, back up Cour, saw Leslie again right after hearing a fun band, and went back in town.

I knew that going uphill would be hard. In fact, the two big question marks for the day was how I would do going up some 300m over 20 km and how I would run under minimal training after getting out of a eight-week bronchitis that seriously limited training. Yes, eight. But going uphill turned out to be fine. Hard, painful, but fine. I got some side stitches but they were controllable.

As we got closer to the cathédrale, the weather degraded fairly quickly, and we even had some snow. But soon enough we were at kilometer 14, and I knew that the climbing was all finished. In fact, the next three kilometers were fairly steep downward, and my pace in the 3:30s reflected that. Then we hit the Vallée de la Jeunesse, turned right into the Parc Louis Bourget, and made it into the Coubertin stadium for the finish. 1h24m03. 4:12 min/km pace for a gentleman’s 25th position out of 421 in the M45–49 group and 249th overall (out of 3,456). Considering everything (new job, sick, not knowing how to go uphill and downhill after 10 years in Houston, first race since IMTX 2018, etc.), I’ll take it.

Overall, it was a fun little race. 20km is a little short for my taste: I don’t train enough at higher intensity to do well in those shorter races. Also, the seeding snafu didn’t help: Starting from the back, not only did I spent 95% of the distance avoiding people, I also didn’t benefit from finding a good group with whom to work (and in which to hide in the windy sections—and there was some serious wind!). But I’ll do this race again. The seeing-the-start-line-from-the-kitchen factor would make it too hard to pass on.

Thanks, Leslie, for putting up with me in the past days and weeks and for sharing the adventure with me! Thanks, François, for the training plans!