By Arnaud ChevallierMarch 14, 2011 No Comments

No matter what problem you are solving, if it’s in an organization chances are that, at some point, you’ll have to present your recommendations to an audience and build a consensus. When you do, make sure that you pick the right types of charts to support your point.

A common characteristic to all effective presentations is that that they have a clear storyline: they take the audience from point A to point B in a logical, efficient manner. A good way to do this is to organize your message in a pyramid structure.

A corollary to having a clear storyline is to ensure that that each slide in the presentation has a specific role: it conveys a single idea. You do that by using a good slide design, and, in particular, by putting the main idea on top of each slide.

But if it comes to displaying data, you also need to pick the right type of chart. Similar to slides, to be effective, a chart must display one main idea and make its point as directly as possible. There are several guides that can help you do that, including Andrew Abela’s chart chooser, and Visual Literacy’s periodic table of visualization methods (see more about choosing charts here).

The point is that there are a number of pre-defined chart formats out there that should answer 95% of your charting needs. In these cases, you don’t have to recreate the wheel, just make sure to pick the right tool for the occasion. But, sometimes, even this plethora of visualization methods just won’t do. Then you might have to develop your own.

If the right chart doesn’t exist… create it

While a pie chart or a waterfall chart might help you with showing how each segment contributes to the whole, once you have more than, say, 10 or 15 components, these representations are not practical, so they wouldn’t allow you to show both the contribution of each segment to the whole and the composition of each individual segment. 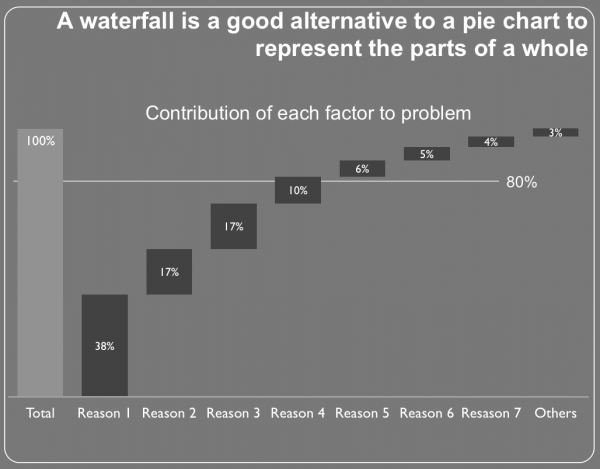 A waterfall chart is a good way to represent the parts of a whole, but it only works with so many components

So you might have to come up with your own custom chart. That’s what the New York Times did, and it is pretty effective. 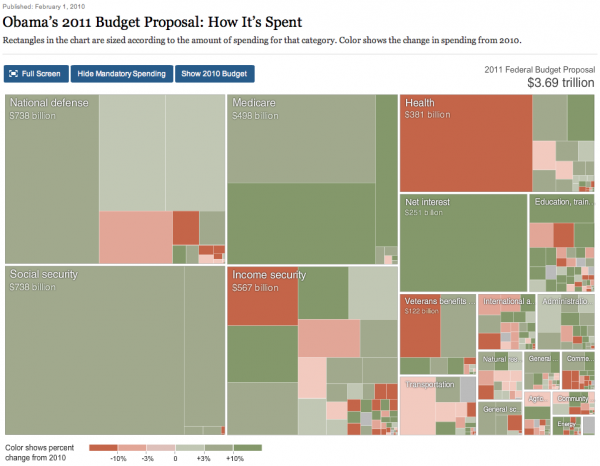 An effective “custom” chart technique: mapping the whole with sizes and colors

In the map above, the size of each segment is proportional to its dollar amount. So you can see in one glimpse what accounts for the biggest spending. Furthermore, the color indicates the gradient of change with respect to the previous year: red is decreasing and green is increasing, so you can quickly tell how each part is evolving.

But perhaps the most interesting feature is that the mapping system is so efficient that it allows you to display, say, the $738 billion in national defense and the $0.22 billion in the NASA Inspector General, education, and other: the first element is over 3,000 times bigger than the second, yet they both appear on the same chart! 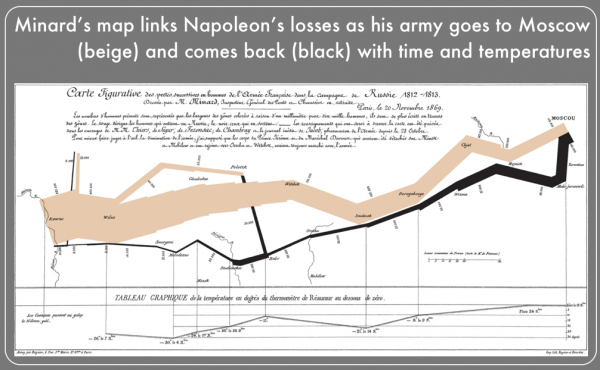 The map shows several variables using only two dimensions: at any given time, it shows:

While Minard didn’t optimize his visual display for a PowerPoint format and a critic might argue that his map requires a little analysis, he does achieve his point: compare the width of the beige strip with that of the black one on the left of the chart; the difference is the number of soldiers that died during the campaign.

Closing, when presenting data, your overriding objective is to ensure that you convey the right idea effectively. In most cases you’ll be able to do so with a “standard” chart format, but if you can’t find the right tool for you there, don’t hesitate to develop you own custom one.