By Arnaud ChevallierJanuary 28, 2019 No Comments 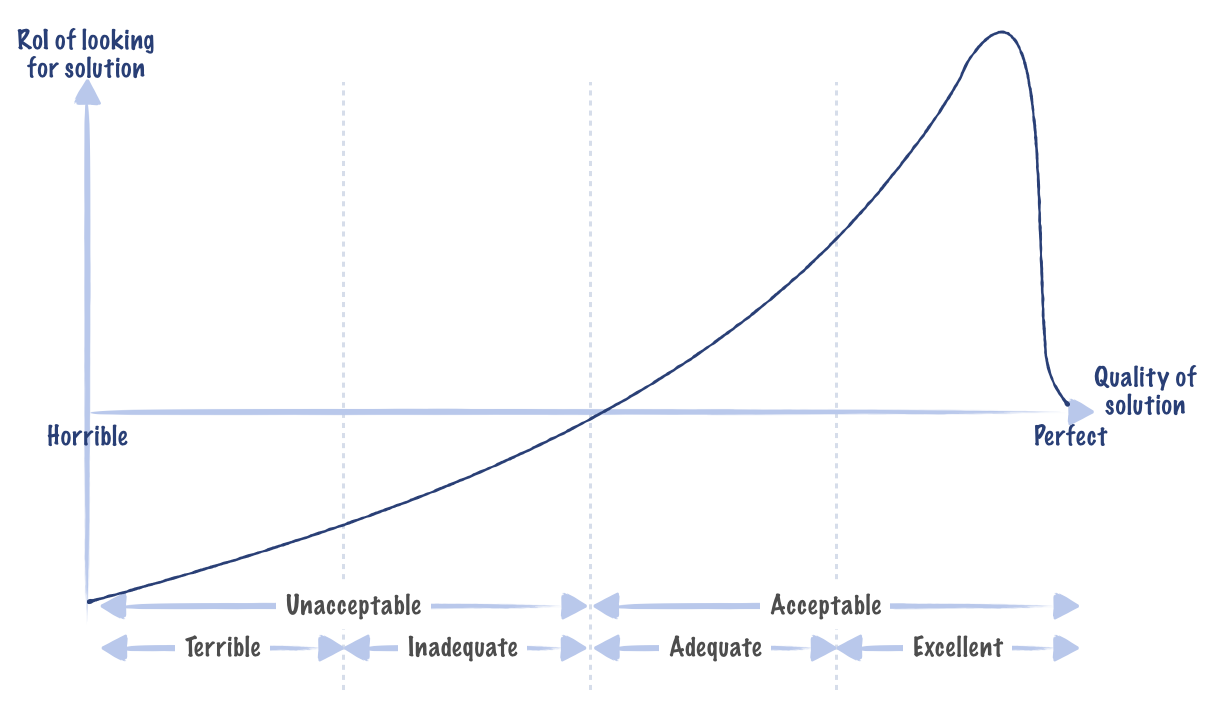 ‘Nothing avails but perfection’ may be spelt shorter: ‘Paralysis.’

Up until recently, my job entailed updating the faculty policy of a research-intensive university. How do you change the rules that regulate the life of some 500 tenured faculty members who -1- like to think they don’t have a boss, -2- question even the most minute editorial alteration, and -3- each have the equivalent of a veto that can shoot down the entire effort? My answer: don’t go for perfection.

Perfectionism is on the rise. And yet, perfection is overrated, at least when it comes to solving ill-defined problems. This post is part of series that argues that going after perfection isn’t necessarily desirable as it can be suboptimal or, as we discuss below, downright destructive.

Pursuing perfection can be destructive

A few weeks ago, I sat in the High Performance Leadership program that my colleague George Kohlrieser teaches at IMD. One of his sessions was on how to use grief to become a better leader. Part of the session was taught by Jamie Andrew, a Scottish alpinist who, after a terrible mountaineering accident in 1995, had his two hands and feet amputated.

Jamie was a fiercely independent guy who defined happiness as climbing mountains and who, from one day to the next, lost that ability altogether. Clearly, if Jamie had clung to the oneright wayhe had always known to being happy, he would have been frustrated beyond belief.

Instead, Jamie comes across as a happy fellow. To be sure, the accident occurred almost thirty years ago, so he’s had time to adjust. Also, he has resumed mountaineering. But he says that he found happiness and fulfillment far before being able to resume climbing.

His finding happiness despite his limitation came at the price of tremendous effort on himself and his entourage, particularly in the couple of years immediately following the accident, when he had to re-learn to do everything.

But, most importantly, finding happiness also required him to completely rethink what being happy meant to him.

Extrapolating, everyone who has found a way to move forward after suffering a grave and irreversible trauma has this ability to see beyond the one single way of being happy. And those who get stuck on perfecting their one way might find themselves less happy or less successful.

Instead of perfection, focus on excellence

So what? Well, instead of perfection, you should aim at excellence or even adequateness. As the graph below shows, you might find a much better return on investments for these types of answers than for perfect ones. In the words of psychologist Jessica Pryor, who sees a lot of students at an elite US university, “aim high, but get comfortable with good enough.”

One way to do this is to pursue incremental improvements. Develop a solution that is the minimum viable product, roll it out, gather feedback, update your solution. Rinse, repeat.

This approach is not new, and it’s an integral part of rapid prototyping, design thinking, agile methods, lean startup techniques, evidence-based management, and other methodologies with more or less buzzy names. It has also proven its results, at least in settings where failing is an option.

Back at my old job, I went through three iterations of the policy over four years. It was a slow, inefficient process that felt that Sisyphus had it easy. But each iteration was a little better than the previous, and each became a more-advanced basecamp onto which we could safely fall back in case someone vetoed our latest effort. We didn’t aim for maximizing benefits in case of success, we aimed for reasonable benefits and manageable consequences in case of failure.

An imperfect solution. Obtained after months of iterative efforts. As poor an outcome as this might sound, my options weren’t this or a silver-bullet regulation but, rather, between this and not being able to effect change at all. In many other settings similarly subject to shared governance, you either acknowledge this trade-off or you risk facing one impasse or another.

Aim for perfection and you risk getting nothing. Aim for something adequate instead, and you might just achieve progress. In the messy realm of CIDNI problems, adequateness might just be as good as it gets. I’ll take implemented adequateness over unrealistic perfection any day.

Curran, T. and A. P. Hill (2017). “Perfectionism Is Increasing Over Time: A Meta-Analysis of Birth Cohort Differences From 1989 to 2016.” Psychological Bulletin.