I raced IMTX in the spring and had a good result (for me): 9h38 with a 1h16min swim, 5h02 bike, and 3h12 run. That gave me some confidence that it is possible to have a decent run in an IM. François, my coach, seized that post-race moment of weakness and offered that I join him at IMFL. Still high from my race, I figured that I might as well. Yep, this is how these things get started. I blame him. As usual, he’s responsible for a good deal of this nonsense.

I wanted to build on the IMTX result, but I’ve battled Achilles issues for long after it. When I finally overcome my Achilles issues, in late September, I had a lot less running volume than I had had for Texas, so I knew matching that running time would be hard. But still, this is Florida, a fast course. I expected to go faster in the water, faster on the bike and do ok in the run, to go sub 9h30 and place somewhere in the top 10 in the age group. With my Achilles well on the way to recovery, I had a solid training block—my biggest so far—with a few weeks above 20h of training. All was going reasonably well.

And then, on Halloween night, four days before the race, I felt the early signs of a cold. That is scary. Luckily, the cold never fully developed, and I was pretty much at baseline on race day. 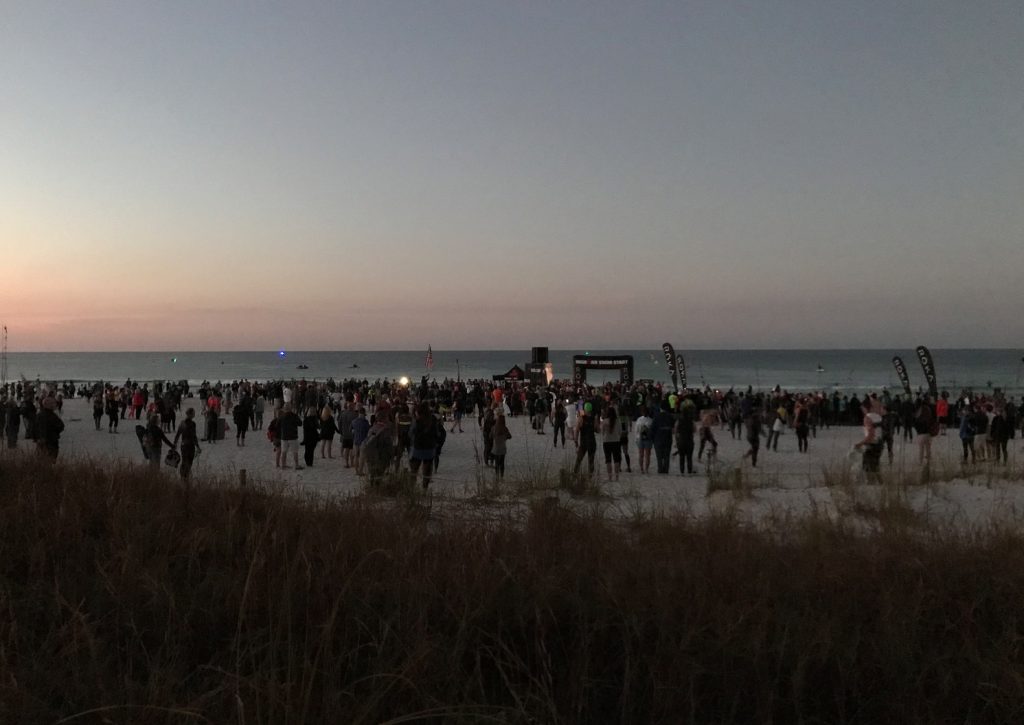 A beautiful day in Florida

My swim was uneventful. I didn’t even see the shark at turn 1. I only saw one jellyfish, and I’m glad that we both agreed to avoid each other.

Comparatively (and even not comparatively) I’m a terrible swimmer, with a personal best of 76 minutes, at IMTX 17. Given that Florida is wetsuit legal and swum in sea water, I was expecting to go significantly faster, but that wasn’t meant to be. We had a rolling start, which in my experience reduces contact, but I thought that the first lap was rather, ahem, physical. Twice I had to readjust my goggles after some heel squarely drove them into my left eye. I seeded in the 1h to 1h10 group and was surprised to bump into people in front of me that had no idea what they were doing: People who seeded in the sub-1h group who had terrible form, if swimming freestyle at all! In fact, a couple of those fellas were wearing AWA swim caps. I wasn’t impressed.

Anyway, I never found my stroke—however inefficient my stroke is—and didn’t capitalize on having the chance to bring down my swim time significantly. Oh, well.

As for the Garmin distance, I will readily admit that my open-water skills are crap, but an extra 700m? I don’t buy it. Especially since François’s was way off, too (albeit underestimating).

I had a hard time getting the power I wanted in the early stages of the bike leg. It took me an hour or so to get in the 210W – 220W range that François and I had planned. Having a hard time cranking up the power is fairly common with me: I most train indoors and, in many of my long sessions, the last couple of hours are a lot more powerful than the first two. In hindsight, I wonder if that has to do with nutrition.

I was constantly calculating my splits. I wanted to finally go under five hours in an IM and, for the second half, was targeting something closer to 4h50. 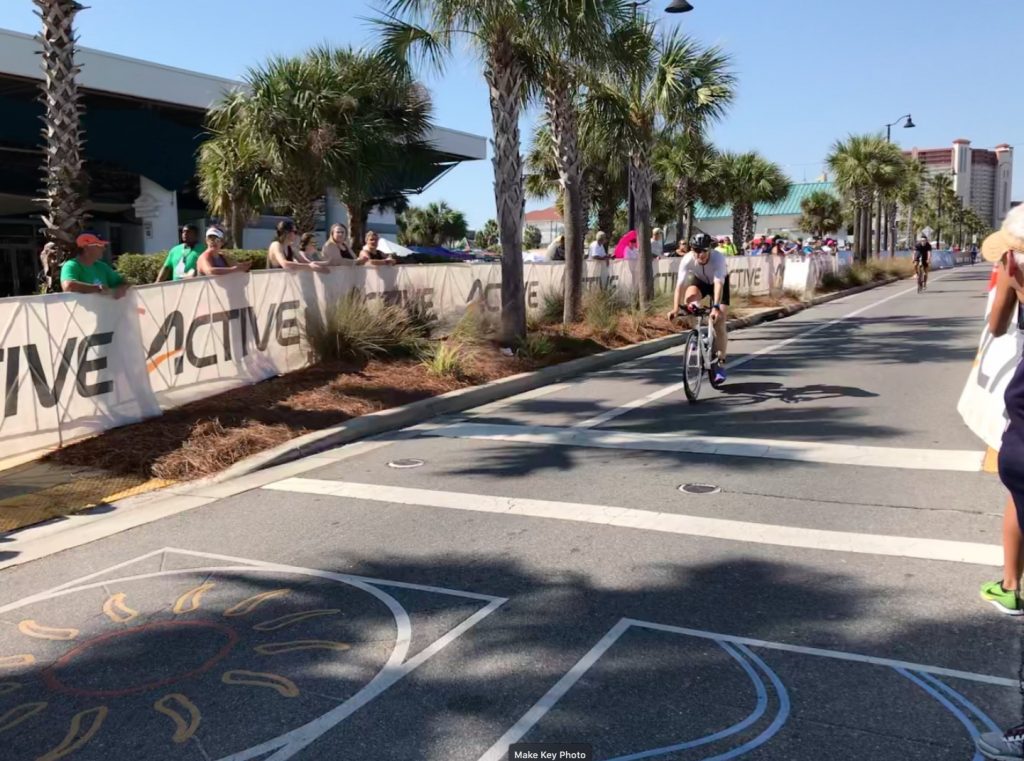 Showing off for the ladies

Overall, the bike was uneventful, and I got back to T2 in the 4h50 without feeling that I had overcooked it. My only issue was my left glute that was painful, and I was concerned that it might cramp hard.

4:17, 4:23, 4:23, … the first kilometers were going nicely. I knew it would go slower, and that was fine. I wasn’t consciously pushing the pace but, having learned from IMTX, I wasn’t consciously trying to slow down and walk all the aid stations either. Instead, I was just getting the job done as naturally as possible. In a way, I’m lucky because, once the swim is over, I’m spending the rest of my day picking up people, and the run is where it is really gratifying. My speed kept on dropping, as expected. Nothing alarming but it was clear that I wasn’t going to go as fast as six months before (that should have been clear way, way before then considering the Achilles, the sniffles, and the temperature that was significantly higher than Texas, but delusion is a powerful force). My left glute stopped bothering me, but the right hamstring started seriously hurting, and I was concerned that it might contract.

The second lap was hard. I was busy doing maths. If I was going to miss the 9h30 target overall, I wanted to, at least, go sub 3h20 on the run. So I gave all I had. I felt that I dug deepest than ever, and I brought it home. (This might not be just an impression, TrainingPeaks rates my IMTX effort at 640 TSS and this one at 694.) 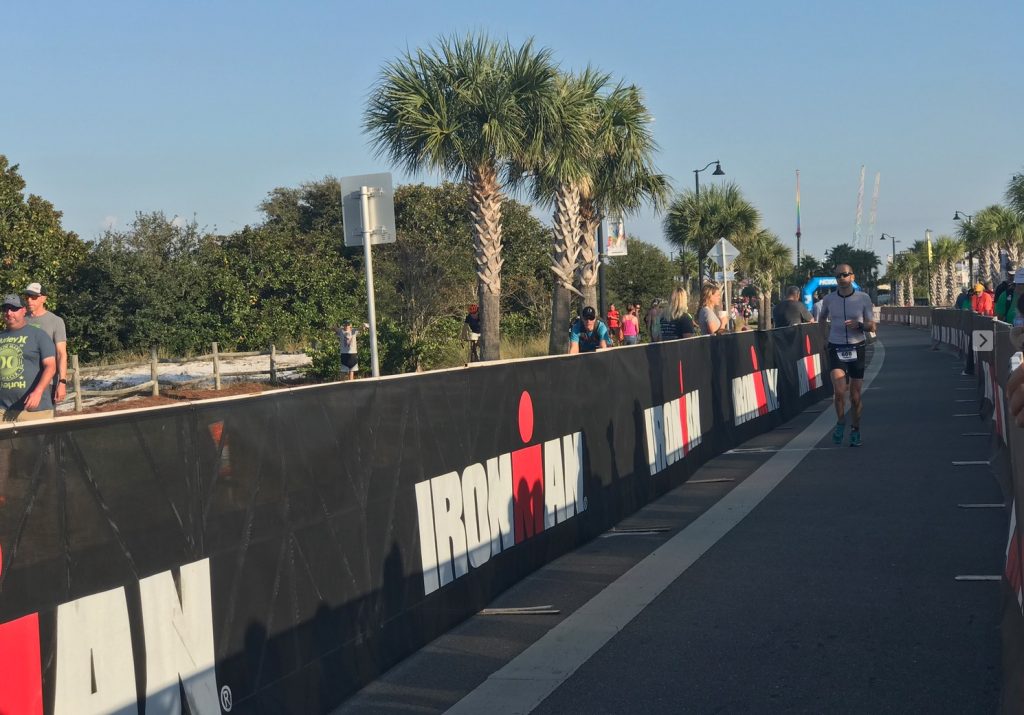 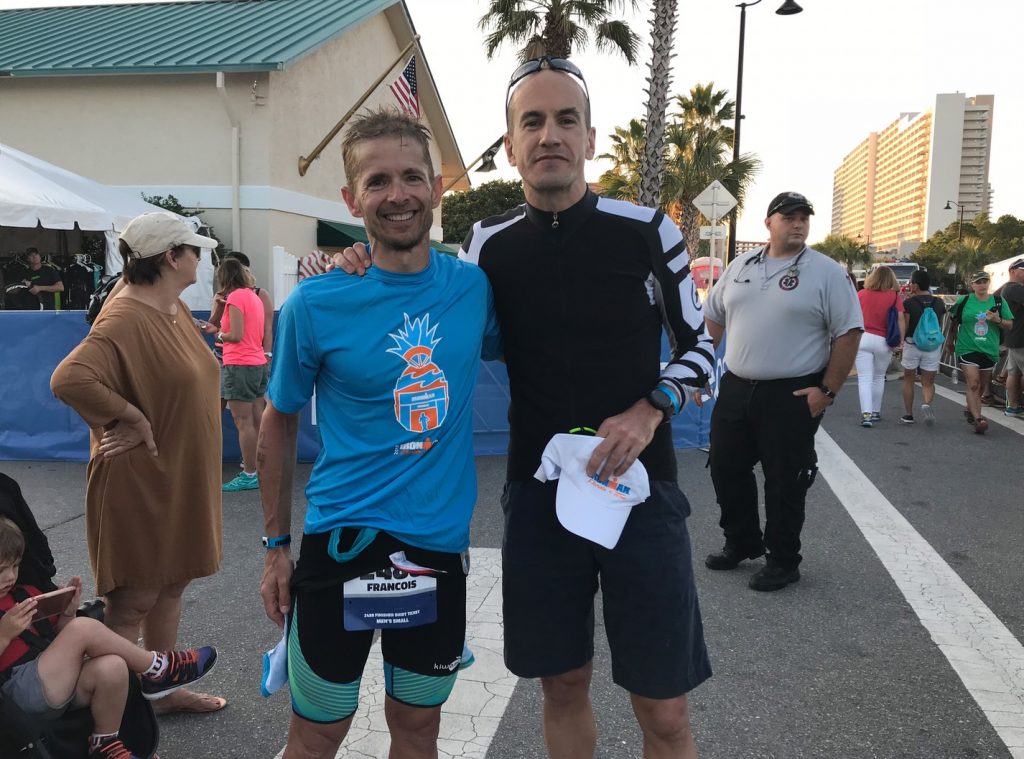 Racing with your mates is just more fun

Leslie, for being a formidable support during the months leading up to the race, the drive to Florida, the actual race (including the photos), and the drive back. I’m amazed by your energy and grateful for all your encouragements! You also found the way to fix my Achilles so I am deeply in your debt. Thank you very, very much!

François, for taking me from 11h22 at IMTX ’11 to the 9h30 territory. Now, all you have to do is help me shave another two hours or so, and then I’ll be seriously competitive (for everyone else, François’ coaching page is here). Thanks also for offering to do IMFL, I guess.

Fred, for being here even when you’re not here. The IM experience without the full Kirby-sur-Seine line-up isn’t quite the same, though.

Lessons learned: I need more calories on the bike. I had two bottles for a total of eight scoops of malto and two of Cyto. So that’s what, 1,000 cals? Then I had some Power Blasts (maybe 500 cals worth), a bit of Gatorade, and a bit of gels. Neither the Gatorade nor the gels work. It’s just too flavorful. I had two flasks of Roctane but they’re so concentrated that I end up carrying them around but not really eating them. So, maybe I had 2,000 cals on the bike. No wonder the day gets longer. Maybe I need to water down the gels. Oh, and on the run, I forgot to take the Power Blasts that I had set out in my transition bag, so I was all Pepsi fueled for the last three hours of the day. Note to self: step one, put important stuff in the transition bag. Step 2—and this is key—equally important, take the important stuff out with you during transition.