By Arnaud ChevallierDecember 10, 2010 No Comments

Simplify as much as you can, but not more.

Simplify as much as you can

When I first moved to the US in the mid-nighties, I became much smarter. At least, I felt much smarter. If I were sick, I would go to the doctor and she would explain me in English what I had, why I had it, what I could do about it, and how I could prevent having it again.

English is my second language, but it was still much better than the French doctors who told me the Latin name of my sickness, prescribed me drugs and not much more. My US-based doctor (she was British) would take a genuine interest in involving me in the solution and the prevention of future illnesses processes. My French doctor was justifying his year of study and demonstrating how smart or, rather, educated he was.

Then, a couple of years ago, I read a great quote by Tom Peters:

Years ago, in my McKinsey days, one of my bosses was bemoaning the help we were getting from an “economic genius.” He said, “Tom, consider a matrix. One axis boils down to ‘simplifier’ vs ‘complexifier.’ The other is ‘smart’ and ‘dumb.’ Thus we are dealing with a 2X2 matrix. The analyst-from-heaven is the ‘smart simplifier.’ The analyst-from hell is ‘smart complexifier.’ He is, in fact, worse that the ‘dumb complexifier,’ who you can simply ignore, and the ‘dumb simplifier’ who might actually be of help.”

It got me thinking about who my team members—and, indeed, myself—were and where we fit in the matrix. So, to make sure I didn’t forget it, I posted a slightly revised version in my office: 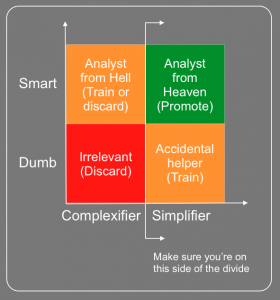 An ability to simplify is a critical skill for an analyst

This has had a tremendous impact on my approach to problem solving. When I started teaching this class, I asked my students to bring an actual problem that they were facing in their professional life and share their issue tree with the group. Several times an engineer would explain that he couldn’t share it because we “couldn’t get it”. Wrong! It was their job to explain the concepts in plain English: take out the jargon and let everyone help them think about the underlying logic and how to improve it.

I can’t stress this enough: some engineers received their best ideas from students in education or the humanities; people that were discarded at first because they hadn’t the proper training. But if they were somehow included in the conversation, they brought a freshness in their point of view that no-one else in the group, especially not the so-called specialists, had.

Therefore it is our job, each of us, to be simplifiers.

So you should simplify; however you shouldn’t oversimplify things, otherwise you get a dichotomous approach to life that won’t be appropriate. For an example, see the current US Senate, where everyone sticks to party lines and, as a result, not much gets done.

Make everything as simple as possible, but not simpler. – Albert Einstein

In any case, make sure you simplify as much as you can and if you feel that there is a risk that you’re oversimplifying, involve your teammates to help you find where.