Complex problems can have a lot of moving parts, and it is easy to lose track of some of those. This why our working memory is a strong limiter in resolving complex problems. One way to address this limitation is to use a why map.

One of the four rules of an effective problem frame is Watson, which states that you should check your assumptions. In other words, you typically need to diagnose before you look for solutions. A why map is a graphical breakdown to help you diagnose. It uses argument mapping conventions to breakdown the thinking behind your assumptions and to identify how this thinking works with evidence.

To illustrate, let’s consider a concrete example. Christopher Froome won the 2013 Tour de France with a commanding lead. So commanding, in fact, that many question whether he rode ‘clean’ or resorted to using performance-enhancing drugs. So let’s put this in a why map. 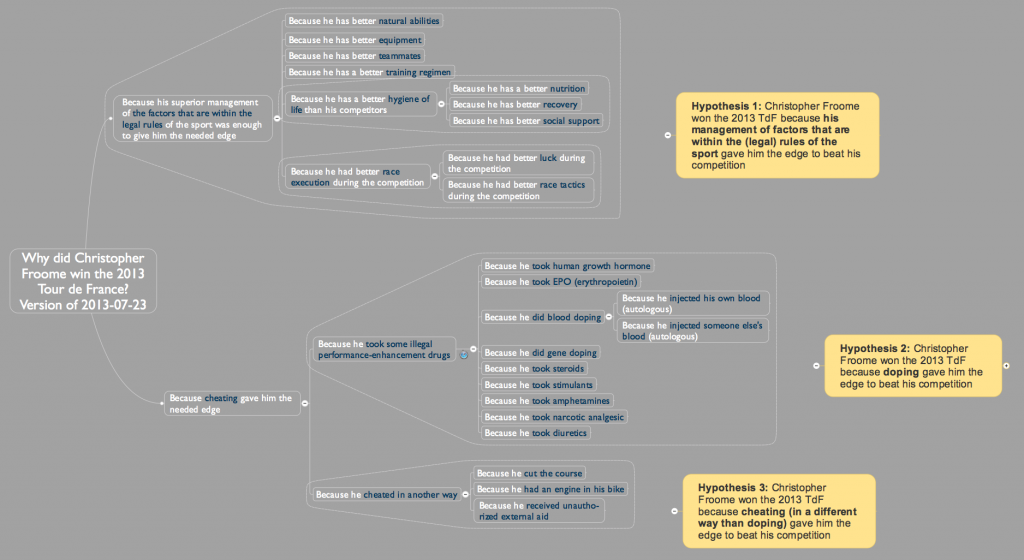 We break down the question in two branches and explore those in detail. Eventually, we map the problem with three hypotheses. The second hypothesis is the one addressing the potential doping situation: “Christopher Froome won the 2013 TdF because doping gave him the edge to beat his competition.” So let’s focus on that one.

Note that, to confirm this hypothesis, both arguments must be true: they are a set of necessary and sufficient conditions to support the hypothesis. A reasonable doubt on either of those should be enough for us to discard the overall hypothesis.

Let’s look at the first branch, about whether Chris Froome was willing to dope to win the Tour. There are three types of  arguments for this claim: some in favor (reasons), some against (objections), and some against objections (rebuttals). 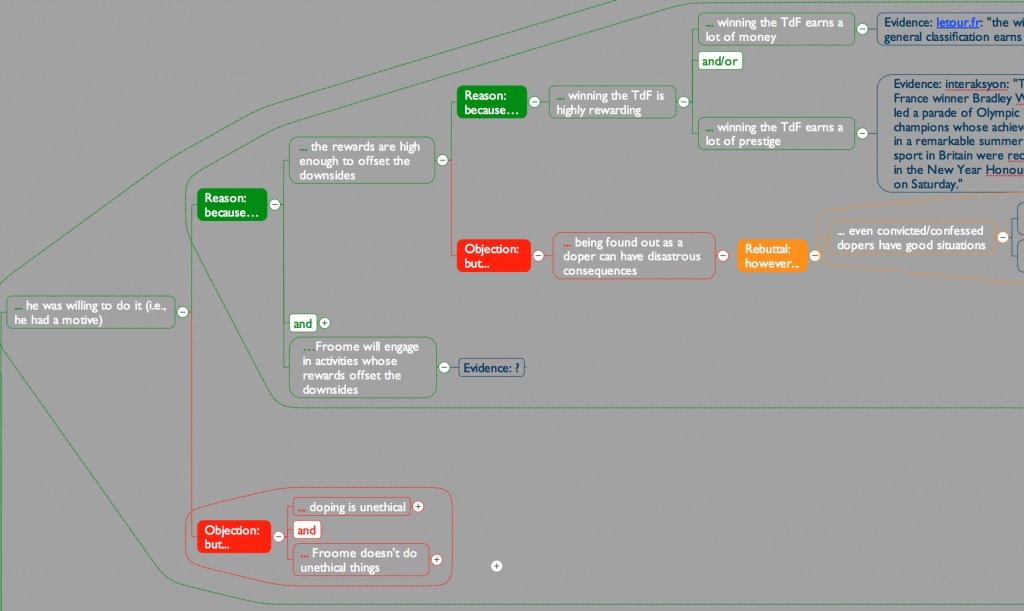 A hypothesis map allows you to capture the logic and the evidence related to your hypothesis.

Reasons start with “because”. For instance, “he was willing to dope because [the rewards are high enough to offset the downsides]”. We capture reasons in green.

Objections start with “but”: “he was willing to dope but [doping is unethical and Froome doesn’t do unethical things].” This lead us to the implicit conclusion: therefore he didn’t dope. We capture objections in red.

The third type of element is the rebuttal (in orange), which are objections to objections.

Drilling down further, we meet another important element: the “and/or” connection. Whereas a “and” connects two or more co-premises, “and/or” fit between independent arguments. Let’s look at examples to explain the difference.

You may also capture your conclusions directly in the map.

“We think that Chris Froome doped to win the 2013 TdF because: [he was willing to do it] and [he was able to do it].” Here, the two elements are co-premises: both are necessary conditions; prove that one is wrong and the whole argument collapses.

Next, use your hypothesis map to capture evidence. That the winner of the TdF earns €450k supports my claim that winning the TdF earns a lot of money. Generalizing, evidence is useful to support claims (reasons, objections, and rebuttals). All branches in your map should have some supporting evidence, even if some say ‘accepted as self evident’.

In the figure above, we consider that the claim ‘doping is unethical’ is self evident.

You can capture your synthesis of the analysis straight into the hypothesis map.

Finally, capture your synthesis for the branch.

Considering the evidence, my synthesis is that the reason presented is indeed valid, so I write it down in a box and put a check mark next to it.

You should go through this mechanic for all branches in your hypothesis map. I’ve linked below the latest version of my hypothesis map for this case. Again, I am not claiming that Mr. Froome either doped or didn’t because my analysis is not finished.

The take away: Hypotheses maps are a good way to capture a diagnostic analysis because of various reasons: